Much has been written about the unusual and adventurous story of the Baker family in recent decades. Sir Samuel White Baker and Lady Florence Baker entered world history as the great Victorian explorers of the nineteenth century. They embarked on expeditions to Africa, researched the Nile, and discovered Lake Albert in 1864, which they named after the Prince Consort of Queen Victoria (who died in 1861).

They also fought vigorously together against the slave trade, which was still widespread at that time (it was prohibited in England, but was still practiced in some colonies and regions of the world). Sir Samuel White Baker (1821-1893) was also a great fisherman, engineer, military man, natural scientist, and writer, and his wife Florence, a woman of extraordinary character, was his suitable partner who supported him in his activities. More than three decades. She herself has an unusual life story, as it was written before and as we will show in this series of materials. 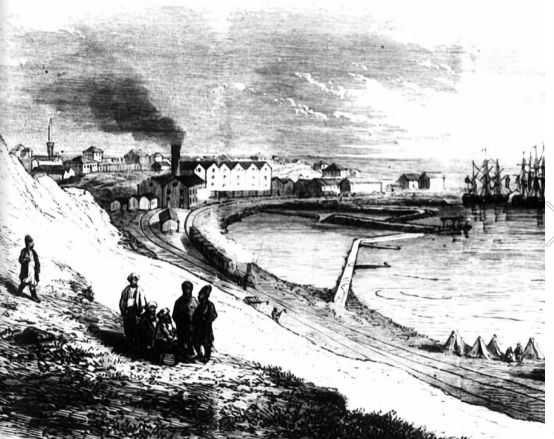 What many do not know is the common point that the famous Baker family had with Dobrogia and especially with the city of Constanta. Thus, the two lived in the town of Kustendjie (other forms used – Kustenge, Kiustenge, Kostence, Kustenge) for a year and a half, from March 1859 to October 1860. Here, on the shores of the Black Sea, the future lord held the position of royal supervisor (in letters sent to England , declared himself “General Director”) of the DBSR, the Danube Black Sea Railway and the Kustendjie Harbor Company Ltd, which undertook the construction of the Constanta-Cernavoda railway with the approval of the Ottoman Empire (Kustendgie – Tchenavoda, Bogazchioi) Becker held a management position as supervisor and was, in a manner Ma, Chief John Trevor Barclay and his brothers, and all the principal engineers involved in the implementation of the Dobrogia Railway. 1860). 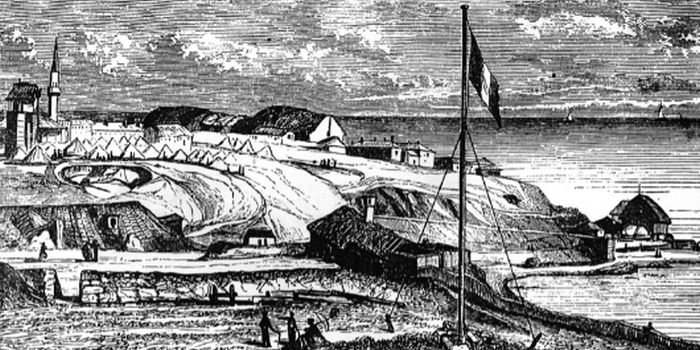 During his time at Kustendjie, Becker was in charge of administrative management, but he did not like office work (although he did so conscientiously). He always found time to go hunting with his wife Florence, and in a year and a half he published in the British magazine “The Field” no less than 14 articles about the fauna, flora and geography of the Costenge region. As a loyal explorer, he received the British press at Kustendjie and was familiar with the procedures for exploring Africa (the voyages of Spike, Burke, Livingstone, etc.). Here, in Constanta, he and Florence decided to give up their administrative positions and go to Africa, as explorers, to enter a new period of their lives … 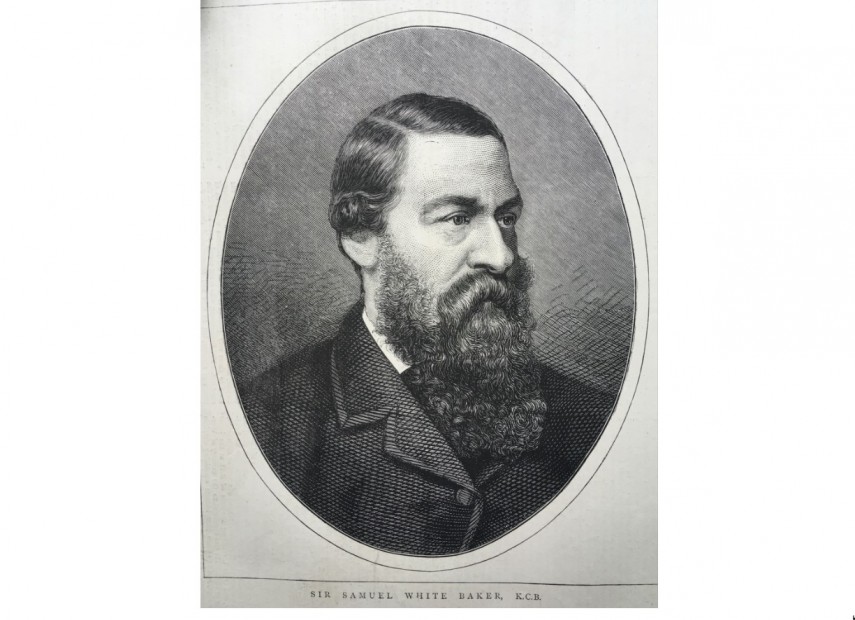 But our real story begins long before Kustendjie and the years 1859-1860. Samuel White Baker was born on June 8, 1821 in London, the second of four children of wealthy businessman Samuel Baker Senior, who worked in the sugar industry in exotic regions such as Jamaica and Mauritius. An intelligent, cheerful and very handsome man, with an adventurous spirit and a passion for hunting, young Samuel White studied at Albion, became a civil engineer in 1841 and worked for a time in the family offices (a period he did not like very much). In 1843 he married Henrietta Martin (his first wife), whose sister married his brother John Baker. After the wedding, Samuel White and his brothers took their wives and went to work on farms in Mauritius. Samuel and Henrietta had seven children, three of whom died young. As Jim Cameron points out (see the bibliographic source), in 1847 the family moved to the island of Ceylon, to a secluded settlement called Nuwara Eliya. After spending 7 years here, the family will return to the Kingdom of Great Britain and Ireland (the official name of the British state since 1801). Unfortunately, in 1855, Henrietta Baker died of typhus, leaving Samuel White a widow and father of four. He entrusts it to his sister Marie (“Min” in family letters) and goes to the Crimea, where the war of the same name (1853-1856) took place.

Two of his brothers, James and Valentine, both officers in a cavalry unit, were already fighting here. However, Samuel did not want to live as a soldier and stayed on the northern Pontic Peninsula for a short time. He attempts to embark on David Livingston’s African expedition, but is rejected on the grounds that he “has no useful occupation”. In 1856, shortly before the signing of the Treaty of Paris (March 30), he was in Constantinople. The Crimean War ended with the victory of the Ottoman-British-French-Sardinian alliance and the defeat of the Russian Empire. As a result of this conflict, the great powers decided by deed of the French capital the neutrality of the Black Sea, which opens the way to great economic opportunities. Britain and France immediately benefited from this agreement, and Albion was interested in buying grain from the Danube Principality and making Ireland’s Great Famine (1845-1849) forever forgotten. This new reality will lead to the concession obtained by the British company Danube Black Sea Railway (DBSR) from the Ottomans, to build the Kustendjie-Thcernavoda railway and operate the Kustendjie port. Work on the railroad began in 1857, under the executive leadership of Chief Engineer John Trevor Barclay. 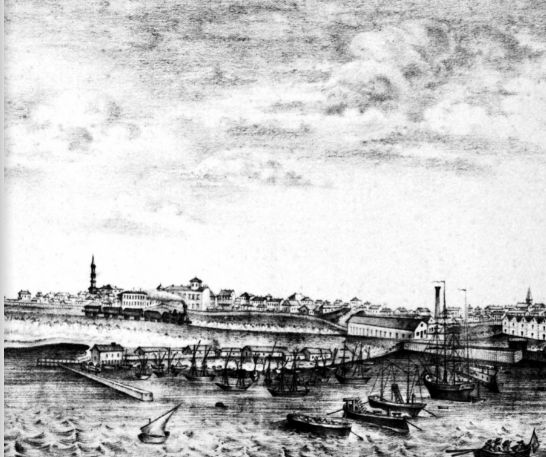 At the beginning of 1859, Samuel White Baker learned about the railway work carried out in Dobrogia, but no sources tell us that he was interested, until then, in any position in the DBSR. However, a special event will change his whole life … Thus, at the beginning of the year, he found Baker on the banks of the Danube, where he was fishing with a good friend, the Indian Prince Maharaja Dulip Singh, heir to the Punjab kingdom. After a game of hunting, the two retreat to Vidin (today in Bulgaria), at that time the city and residence of the Ottoman pasha. You have arrived just as the elite slave fair is being held here. Among them is a blonde and beautiful girl of only 15 years old, Barbara Maria Szaz (SAS) – Fengian (later Vignani) who will go down in history as … Lady Florence Baker …

Mentionsed – The term used by the English language of the nineteenth century is Kustendjie, and it is found in all historical sources, in British documents, books, newspapers and magazines of the time. We preferred the use of the British term at the expense of others known but not used by UK sources.


Thomas Forster – “The Danube and the Black Sea – Memoirs of Their Intersection by a Railway between Chernavoda and the Free Port of Kostingi”; London, edited by Edward Stanford, 6 Charing Cross, 1857
Henry C. Barclay – “Between the Danube and the Black Sea (or Five Years in Bulgaria”), London, John Murray, Albemarle Street, 1876.
Gheorghe Radu Stănculescu, Radu Ștefan Cornescu and Dorin Paul Bucur – “Catalog of the Documentary Exhibition Opened on the Occasion of the 150th Anniversary of the Opening of the Cernavoda – Constanţa Railway”, October 4, 2010; collaborators Lavinia Gheorghe and Alexandru Popescu; The catalog was made under the patronage of the Order of Architects of Romania, Dobrogia Branch and Constanta Museum of National History and Archeology.

About Christian Celera
Christian Celera was born on July 16, 1974, in Cherghiol, attended Gen 12 and 25 courses and graduated from High School “Decebal”, in Constanta, class of 1992. He attended Law School “Nicolae Titulescu” in Bucharest and degree in Forensic Medicine. After graduation, he completed his military service and then worked for three years as a lawyer at Mangalia. In 2001 he joined the press and for 15 years worked for several newspapers, including ZIUA de Constanţa, which covered various areas – from events to social, cultural and sports. He worked on two television stations, and in one of them as a producer and screenwriter, he produced 19 documentaries about the archaeological sites of Dobrogia. Documentary film production continues today and it publishes materials to promote the history and culture of Dobrogea.
He holds a master’s degree in anthropology and European history, and graduated from the Faculty of History of Ovidius University in Constanta. He is currently a doctoral student at the Faculty of History at Alexandru Ioan Koza University in Iai. He is the author of the three-volume series “Stories from the Black Sea” and the historical novel “On the Edge of the Empire – Origins”, books published between 2014-2018.