The sustainable urban mobility (pedestrian and bicycle) corridor along the Someșul Mic River has entered the tender stage. This is after the mayors of the four localities where the 75-kilometre route will be configured, Cluj-Napoca, Gilo, Floresti and Abahida, signed a cooperation protocol for the joint realization of studies. Cluj-Napoca City Hall has auctioned off the services of urban planning documentation preparation, feasibility study, technical expertise and technical details to obtain a construction permit, within a contract estimated at more than 7 million lei. In accordance with the design theme, local administration requires a safe and attractive road, integrated in the landscape, with rest and auxiliary points, but also connected to the public transport system and rail.

The contract for “PUZ Development Services, Technical Expertise, SF, Specific Studies and DTAC to arrange the Sustainable Urban Mobility Corridor (for pedestrians and bicycles) along Someșul Mic” was put up for tender this month. The deadline for submitting bids is June 14. The contract is estimated at 7,050,000 lei and has a duration of one and a half years. The award criterion is the most economically beneficial bid, with only 35% of the bid price. The expertise of the lead experts is recorded in the design team (48%) and also the performance of the design team (the lead expert must have won an award in the solution competition).

Bidders must demonstrate that they have provided similar services as specified in the specification (PUZ Design Services / SF / DALI / DTAC / Technical Design / PT Review (any of these phases) for the areas of road infrastructure, lighting system, pedestrian area design). , parks/green spaces, completed in the past 3 years, with a cumulative value of at least one million lei, and minimum requirements will be met at the level of a maximum of 5 contracts.

“The project intervention area covers a total length of about 75 km, divided into eight sections, with variables and connections that follow each other from west to east. The logic of the proposed route is based on the following three principles: Whenever possible, the proposed route closely follows the Someș route, While avoiding significantly affecting the land and private buildings along its length, it provides as many points of contact as possible between cycling, running and hiking routes and areas of historical, touristic and natural interest in the Cluj metropolitan area (ZMC).
Furthermore, it was designed as part of a regional system of cycling, running and hiking trails, designed to take advantage of areas of historical, touristic and natural interest in Cluj Province. The first section of it also ensures connection with the regional system of roads dedicated to sports and recreation in the Ario Valley,” and is indicated in the design theme established by the City Council.

This year, the municipality of Cluj-Napoca decided to start this project, in partnership with the commune administrations of the metropolitan area, for which a bicycle and pedestrian path has been proposed. He also worked on the subway project and the capital belt project.

At the beginning of April, a partnership agreement was signed between the mayors of Cluj-Napoca, Gilo, Floresti and Abahida for the realization, in partnership, of the feasibility study, of the Urban Areas Plan (PUZ), of the technical documentation for the building permit. DTAC), as well as all studies related to the investment objective “to develop a sustainable urban mobility corridor (for pedestrians and bicycles) along the Sumo River”.

The bike path was proposed by the SOS Cluj Association, led by former MP Adrian Dohotaru, and was later supported by other civic organizations concerned with bringing Someș into city life. Linked to it are the strategic plans of the city drawn up by World Bank experts or investors who have major projects in Cluj-Napoca and who have declared their willingness to support the investment.

“The objective of the non-motorized commuting corridor is to connect the municipality of Cluj-Napoca with its urban area. In addition to the benefit offered in terms of urban mobility, the corridor will be an attraction in itself for those looking for recreational activities. The implementation of the project will expand the network of alleys, parks, bike paths and spaces green, according to the principles of sustainable development, where walking or cycling takes precedence over motorized traffic and which takes place along an attractive and unaffected natural corridor.. The Somo River will be transformed into a valuable natural component that contributes to the development of the city,” Mayor Emil Bock stated about the project. .

What are the project requirements

The project has the following set of requirements, which must be met by the documents required in the specification:
1. Historical, archaeological, zoological, floral, culinary thematic circles, etc. It must meet the following requirements:
The integrity of the proposed objective circuits:
Bicycle traffic should be clearly separated from pedestrian traffic and motor vehicles. It should also be mentioned
Appropriate and clear.
Automated traffic should be limited.
Points of contention between the different types of traffic should be minimal.
The proposed lighting solution should avoid light pollution.
Attractiveness:
Circles should be harmoniously integrated into the landscape.
Furniture should be resolved uniformly for all proposed paths. However, the suggested solutions may differ enough that each type of path contains a file
The special character, according to its subject.
Each proposed circuit should have a topic that is clear and easy to understand.
Furthermore, the districts must be able to merge into coherent thematic groups.
The proposed districts should include as many objectives of interest as possible, without losing their coherence.
Accessibility and convenience in thematic circles:
The proposed circuits should be accessible to both pedestrians and cyclists.
It should also include rest points, located at intervals to ensure that it runs smoothly.
Objectives of interest must be accessible to persons with disabilities.
Maintaining Protected Objectives:
Lenses must not be optically contaminated.
The protection requirements for each type of target must be met.
Excessive tourism in the protected target area should be avoided.
2. The qualitative index of the proposed sports and recreational methods must meet the following requirements:
Suggested sports and recreational road safety:
Automated access to sports and recreational roads should be avoided.
Areas with a high degree of difficulty should be clearly marked, and they should be accompanied by observation points.
Suggested methods should include first aid points in their main points.
Intervention vehicles should have easy access to the proposed routes.
When necessary, roads should be equipped with shelters for inclement weather.
Attractiveness:
Sports facilities must be integrated into the landscape.
Whenever possible, the existing landscape elements should be utilized.
The proposed methods should not be lightly polluted.
Ease of access and convenience for the proposed sports and recreational routes:
The proposed routes should be connected to public transport stations at their main points, including near the ends.
They should also be accompanied by car parks near the ends, without parking negatively affecting the landscape.
Diversity of sports and leisure activities:
The proposed itineraries should allow as many sports and recreational activities as possible.
Priority should be given to routes that offer year-round sports and recreational alternatives.
Also, priority should also be given to methods intended for as many age groups as possible.
Likewise, priority should also be given to roads with the highest degree of difficulty.
The proposed master tracks should be arranged and equipped for both table and performance sports.
3. The rail transport access areas in major cities shall perform the following functions:
Advance indication and clear indications of arrival areas on the proposed routes from the main directions of travel.
Clearly marked and signposted waiting areas and waiting areas suitable for non-motorized boarding
(Scooter, bicycle, etc.).
Consistent and convenient flows of information and custom up-and-down processes, tailored to the type of users who
Crossing access points to the urban transport system (pedestrians, cyclists, people with disabilities, etc.).
Clear and intuitive information about connections between access points to the urban transport system and areas of interest in the Cluj metropolitan area and in the Cluj province.
Clear information about the freight system, as well as simple and intuitive possibilities for purchasing transportation tickets, both digital and for print.
Safe crossings of the urban transportation system, either from level, underground or above ground, when needed.
Comfortable and safe bicycle parking, which can be modularly expanded as the demand for it increases.
Safe, fun and friendly waiting areas for children and families.
4. Information and comfort points on the proposed sports and recreation route should be so modular that their equipment can vary, depending on their location on the road. Thus, information point talents, in their extended version, should include a minimum set of the following spaces:
rest area, which may also contain a sleeping area, if necessary,
place to eat,
bike storage,
bicycle repair space,
a place for selective waste storage,
Toilet,
Fountain.
Also, the interior spaces should be heatable so that the tourists have the necessary thermal comfort on cold days.

Where the path of the 75-kilometer track passes 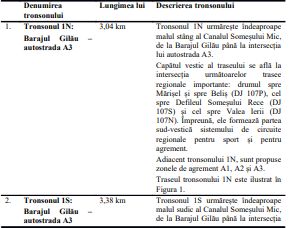 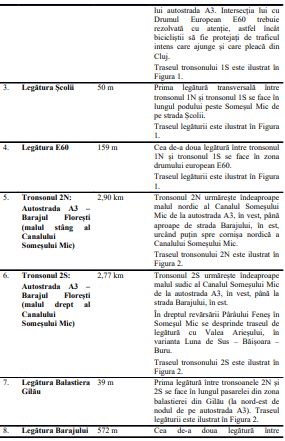 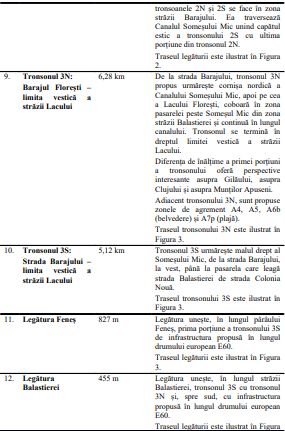 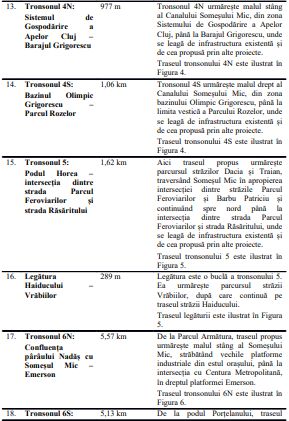 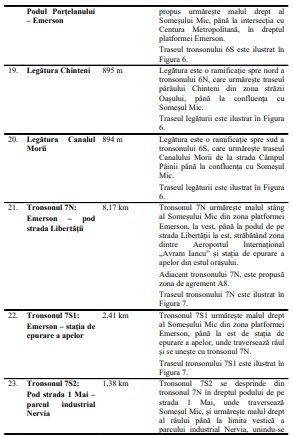 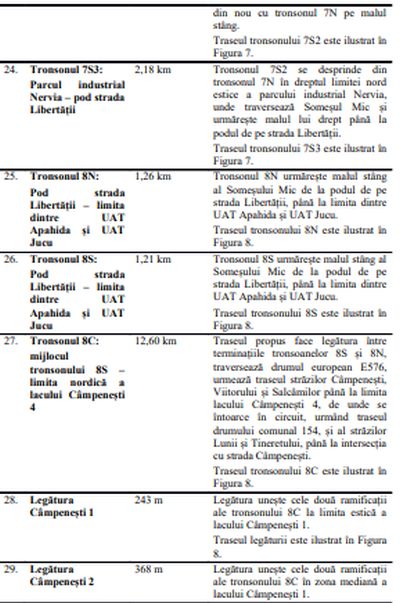 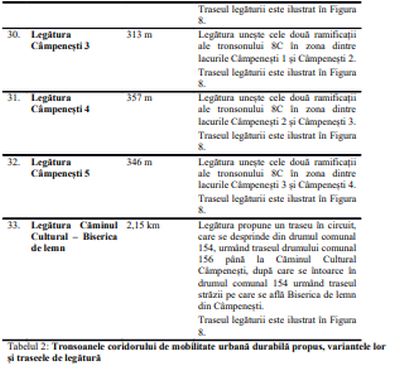