The 34th edition of the Turin International Book Fair will take place from May 19-23, 2022. The theme for this year’s edition is Wild Hearts / Wild Hearts. The Romanian Cultural Institute, through the National Book Center, the Romanian Institute for Culture and Human Research in Venice and the Accademia di Romagna in Rome, organizes our country’s participation in the most important personal event in Italy with a national position entitled Romania: Il coraggio de fer literature… / Romania: Courage to make literature….

The Romania Pavilion, with an area of ​​40 square metres, was created in partnership with the organizers of the Turin International Book Fair, according to a concept inspired by the main theme of this year’s edition. With this in mind and bearing in mind the current international context, Accademia di Romania in Rome, together with its partners, has proposed an engaging graphic that conveys a message of tonic and upbeat by writing the word courage in several internationally spoken languages. Throughout the exhibition, a series of Romanian literary events will be organized both in the Roman amphitheater and in some exhibition halls aimed at promoting the volumes of Romanian writers published by Italian publishers in recent years.

The Romanian Pavilion, located at Pavilion 1 B44 – C43, will include: a bookstore space, organized with the support of the Libris Library in Braشوفov and a small literary salon dedicated to this year’s Romanian literary performances. During the five days, in the Roman Pavilion, the Azzurra Hall and the Indaco Hall within the exhibition, events will be organized with the aim of strengthening bilateral relations in the field of literature, translation and editorial policies. It also aims to stimulate the interest of specialists, publishers and translators in Romanian literature in its broadest sense, to establish direct contacts between guest writers and the general public, as well as to maintain the connection of Romanian society with the cultural values ​​of the country of origin.

About thirty guests, Romanian and Italian, from different fields, are representatives of the event profile: Romanian writers and writers, translators of Romanian literature into Italian, historians, journalists, literary critics, representatives of Italian publishing houses (the program of literary events is in the photos below). 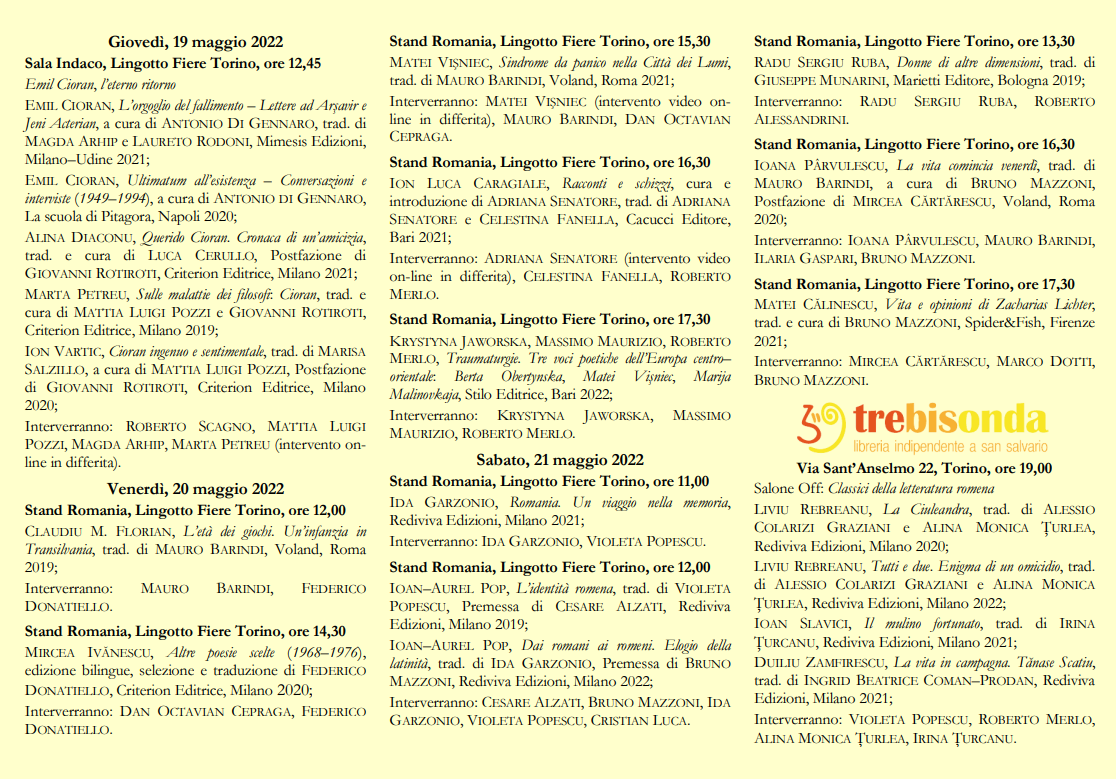 – Continue the article after the announcement –

Organizing Romania’s presence at the Turin International Book Fair is part of the strategy of the Romanian Cultural Institute and its Italian subsidiaries to promote Romanian literature and culture in Italy.