Between 1 July and 1 August 2022, the Department of Emergency Situations of the Ministry of the Interior, through the Inspectorate General for Emergencies, participates with a specialized national unit for combating forest fires in a pilot pre-positioning program organized by the Directorate-General for European Civil Protection and Humanitarian Aid Operations – DG ECHO, from In order to enhance the flexibility of the Greek authorities in managing this type of risk.

The goal of the program is to reduce response time in the event of forest fires, simplify the preparation of intervention units for Member States, and improve interoperability between participating forces. 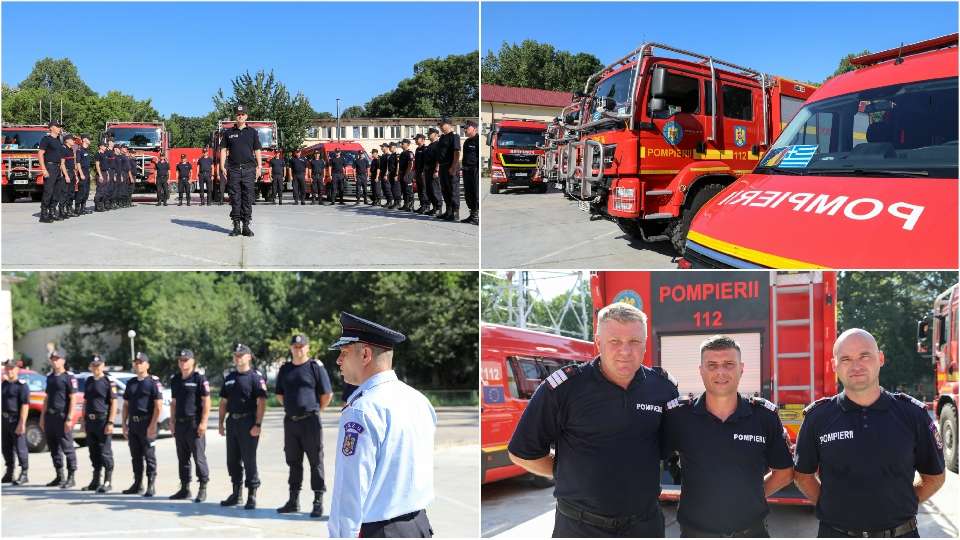 The Specialized Unit for Extinguishing Forest Fires is activated and operated in order to carry out specific tasks of monitoring and extinguishing outbreaks on the territory of Greece, at the sites established by the Greek partners.

The intervention technology and personnel will be supplemented according to the dynamics of situations recorded in the field, at the request of the Greek authorities, through the European Civil Protection Mechanism.

The staff will be changed on 16.07.2022, and another 28 firefighters will replace the staff in Athens.

All fire trucks will be equipped with portable engine pumps and a first aid kit, and each firefighter will benefit from personal protective equipment, including a compressed air device and a spare bottle.

In preparation for the mission, as of June 27 of this year, a delegation from IGSU traveled to Athens for a pre-programme preparation session. On this occasion, important aspects were presented and field readmissions were conducted.

The assistance program is funded by the European Union and provided as a support measure to Greek communities, following the devastating fires last year. It is part of the new EU policy to reduce forest fires in southern Europe and brings together firefighting teams from Germany, Bulgaria, Romania, France, Finland and Norway.

In the summer of 2021, huge fires destroyed large parts of the forest in northern Athens, as well as a large area of ​​forest located on the second largest Greek island, Evia.

At that time, the fires were optimally managed with the support of many European countries, including Romania.

We remind you that on August 5, 2021, the Inspectorate General for Emergencies, as the National Focal Point, received from the European Commission Emergency Response Coordination Center (ERCC), through CECIS, the request of the authorities from Greece for international assistance, in light of the emergency caused by the spread of wildfires Forests on Greek territory at that time.

Thus, between 06-16.08.2021, a specialized intervention unit to extinguish forest fires, consisting of 108 firefighters and technical means, was deployed in Greece to support missions in areas severely affected by fires.

The assistance provided to the affected country was granted at the request of the Greek government for international assistance through the European Civil Protection Mechanism.

The second task included allocating between 20-29.08.2021 an intervention unit specialized in extinguishing forest fires, consisting of 142 firefighters and technical means. The assistance to the affected country was also granted on the basis of the Greek government’s request for international assistance through the European Civil Protection Mechanism.